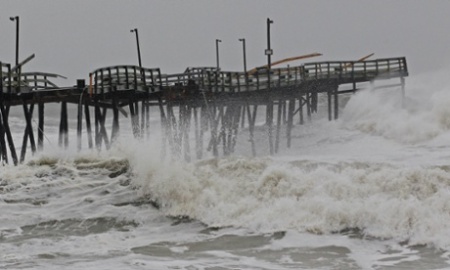 The question pops up every time a tragedy happens.  It arises when bridges collapse and when hurricanes strike.  We ask it when tragic car accidents claim loved ones, when terrorists blow up the innocent, and when cancer strikes. Where is God when bad things happen?  If God is good, why is this happening?

Unless you have been under a rock somewhere, I’m sure you are aware that Hurricane Sandy has wreaked havoc upon the eastern coast of the United States.  The liberal on-line mag, The Huffington Post, ran an article Monday entitled, “Hurricane Sandy Presents Complex Questions About God for Clergy And The Faithful As Victims Cope.”  Unfortunately, the article highlights responses from “theologians” and authors who run desperately afar from a biblical understanding of God and suffering.  In no way can I give a fully orbed response to the problem of pain and suffering in a 500-word blog.  Men far smarter than I have written tomes about this subject from every imaginable perspective.  Five hundred words will probably not lead to any new earth-shattering ideas, especially written by me!  However, I would like to address some of the underlying issues in this matter and respond briefly to some of the garbage floating around out there.  Perhaps thinking through these perspectives will better help you on your faith journey.

Six prominent contemporary responses are offered from a theistic perspective (a perspective that assumes the existence of some form of god) to the problem of evil.  When someone tries to harmonize the existence of an almighty, benevolent God with the existence of evil, philosophers call that argument a “theodicy.”  What follows is a brief description and critique of six popular theodicies that exist today.  Ask yourself, “Where do I fit in this spectrum?”

The “Stick Your Head in the Sand” Response

Many Christians simply choose not to respond to the hard questions of life.  Perhaps their faith is shallow, unthoughtful, or simply uninformed.  Regardless of the motivation, to fail to respond with biblical answers to a world that is asking honest questions is to shirk our responsibility to both the Lord and the world.  Scripture clearly admonishes us to “honor Christ the Lord as holy, always being prepared to make a defense to anyone who asks you for a reason for the hope that is in you; yet do it with gentleness and respect” (1 Peter 3:15).  While we may not be able to completely satisfy the questions of one in the throws of pain caused by unexpected tragedy, we can do much more than hide hoping that we don’t get asked difficult questions.

Many people believe that God is not in control of human history.  This is not the argument that God could be in control but has chosen not to be active.  Those who respond in this way think that God is incapable of turning history (weather, events, politics, accidents) for His purposes.  Their concept of God is impotent and  limp-wristed.  This response is unacceptable for bible-believing Christians.  The Psalmist sang of God’s sovereign reign over nature (Psalm 29:3-10).  God is said to care for and rule over the creatures of the earth (Jonah 1:17; 2:10; Psalm 147:9; Matthew 10:29).  God actively upholds and sustains the universe (Hebrews 1:3).  He is not a powerless deity.  He is “the blessed and only Sovereign – the King of kings and Lord of lords” (1 Timothy 6:15)!  People who explain away the problem of evil by describing Him as powerless over history have only neutered the God of Scripture.  This answer is clearly unacceptable.

Some people believe that God is all-powerful, but has chosen to remove Himself from the course of human history.  He is like a cosmic watch maker who wound up his creation and sits backs and watches things play out, choosing not to interfere.  Again, this is opposite of biblical teaching.  In fact, one of the things that sets Christianity apart from other faiths is that our God came to the world through the incarnation of Jesus Christ and willingly laid down His life as atonement for the sin of man (1 John 3:16; John 3:16-18).  One of my favorite authors, Wayne Grudem says that to argue that God “is too great and lofty to care enough about his creation to intervene to stop evil . . . denies God’s love, his eminence and his involvement in the preservation and support of his creation as declared in the Scriptures” (To see Grudem’s more theological and absolutely better perspective on theodicy, click here).

Some say that the existence of evil proves that God isn’t good.  After all, if He is truly in control and involved in human history and doesn’t stop evil, then He is clearly not benevolent.  Such arguments falter in light of the biblical evidence.  Primarily, these arguments tend to ignore the reality of man’s fallen nature.  Many ask with Rabbi Harold Kushner why bad things happen to good people.  The problem with that question is the faulty premise upon which it is built.  You see, there is no such thing as “good people.”  Morally pure people are myths, like unicorns or leprechauns.  The Bible clearly teaches that we are all sinners (Romans 3:23) and deserving of hell (Romans 6:23).  The more appropriate question for us to ask is, “Why do good things happen to bad people?”  The premise of this question is rooted in reality, and it leads us to the delicious truth of God’s grace.  That God would bring good into the world and into our lives is testimony of His benevolent nature.  To view God as malevolent is to create a God distinct from the one found in the Bible.

The “God must be angry” Response

Inevitably, when tragedy strikes some would-be prophet speaks up and declares that God is unleashing His judgment on humanity.  Now, the difficulty with responding to these “prophets” is that humanity is certainly deserving of God’s judgment, so there is potentially a kernel of truth in their proclamation.  However, I’m left wondering how and why they came to that conclusion.  Jesus was once asked about tragedies and if the victims were somehow worse sinners because they lost their lives (Luke 13:1-5):

In these two instances (those who died at Pilate’s hand and those upon whom the Tower of Siloam had fallen) detail historical events over which God, who is both good and involved, had control.  Both events left victims.  Jesus clearly steered the conversation away from pronouncing God’s judgment upon the victims.  Rather, he said that we should examine ourselves and repent of our sins rather than fixate upon the sins of others.  Fred Phelps and the members of Westboro Baptist Church have already begun rejoicing over Hurricane Sandy and the destruction she has wrought.  They have declared that the storm is the means of God’s judgment.  (I’m not linking to the source here, because I think they are idiots and I don’t want to drive people to their website.)  Fred, it’s time for you to shut up, buddy!  Use this tragedy as an opportunity to follow the words of Christ and examine yourself.  We are not privy to God’s purposes.  In fact, to oversimplify His reasons or to say that God had only one reason for a storm is to diminish how personally he interacts with us.  God’s reasons are often multi-faceted and beyond our finite comprehension.  Those that see an angry God behind every tragedy have lost track of Jesus’s teaching in Luke 13.  While we all deserve judgment, it is God’s purview to both pronounce and execute that judgment.

The “God is soul-building” Response

Pain and tragedy do exist.  God is Almighty.  He is involved in human history.  He is benevolent.  Tragedy isn’t always the result of judgment.  So why does pain and suffering exist?  Consider for a moment that God has a greater agenda.  He is ordaining and using tragedy to fulfill his divine purposes among the peoples of the earth.  When tragedy strikes, we feel small and we cry out to a God that, in large part, we have been ignoring.  When pain comes, we pause and seek relief in the hands of the Almighty – the same Sovereign that we are otherwise too busy to acknowledge.  When natural disasters come, we often help our neighbor the way God intended for us to help all along.  When our possessions are swept away in the storm, we realize that we had much more than we needed and we truly thank our benevolent God for what we do have.  Pain is not fun.  But it is useful in God’s economy.  C.S. Lewis once said, “God whispers to us in our pleasures, speaks in our conscience, but shouts in our pains:  it is his megaphone to rouse a deaf world.”  All theodicies that abandon God’s sovereignty, benevolence, and imminence are found wanting.  Only the solution that sees God ordaining and working through tragedy and pain will facilitate our healing in times of tragedy.

Growing up in Mobile, Alabama, I have personally lived through at least six direct hurricane landfalls.  As such, my heart goes out to those on the eastern seaboard who are presently enduring Hurricane Sandy and her aftermath.  The loss of life and property stirs compassion in my heart and drives me to prayer for those affected by “The Storm of the Century.”  I know that my prayers are meaningful because God is powerful, good, and involved.  Praise the Lord!