Joe Kennedy is the most well-known assistant high school football coach in America.  He’d rather that not be the case.

For the past 9 years Coach Joe, a Marine combat veteran and follower of Jesus Christ, has been praying at the 50 yard line at the conclusion of every football game.  Win or lose, Joe would bend his knee to thank God.  Often his own players as well as players from opposing teams would join him in that prayer.  Their voluntary participation was not coerced or required.  Joe was inspired to lead these post-game prayers by the movie “Facing the Giants.”

Earlier this year, someone complemented a Bremerton High School principal on the players peacefully gathering at the 50 yard line with Coach Joe to pray.  In a stunning display of the hyper-litigious, politically correct environment in which we live, that seemingly innocuous compliment led the principal to question if the school was in compliance with laws because of Coach Joe’s prayer.  This inquiry then led to a Sept. 17 letter to Joe Kennedy from the School Board.  Even though Joe had not asked young men to pray with him, he was not free to express his own faith on the job.  For some weeks, Joe complied with their mandate.

On Friday, October 16, while the students sang the fight song to the audience, Joe quietly knelt at midfield and bowed his head in prayer alone.  Even though students weren’t involved, the school board felt compelled to press their point on Kennedy.  In a October 23 letter, Superintendent Aaron Level wrote, “Any further violations will be grounds for discipline, up to and including discharge from District employment.”  Joe was forbidden to pray, even alone, in any way that was “readily observable to (if not intended to be observed by) students and the attending public.”

There you have it.  Public school employees are not allowed to have their own faith.

The school board in Bremerton, Washington, says employees can have faith – they just can’t have any public demonstration of that faith.  The ignorance of such a statement is mind-numbing.  What is a person to do if their faith, like the Christian faith, demands a public display?  Jesus said, “For whoever is ashamed of me and of my words, of him will the Son of Man be ashamed when he comes in his glory and the glory of the Father and of the holy angels” (Luke 9:26).  Faithful Christians are expected to declare the Gospel in public to a lost and dying world (Mt. 28:19-20; Acts 1:8). Our faith demands public expression.

The Bremerton School Board has followed along with the absurdity of modern thinking.  We have been trained to think that the highest virtue is tolerance.  It seems, however, that society responds very intolerantly towards Christians.  This sad episode can be demonstrated over and over again.  Everything from manger scenes to valedictorian speeches to holiday greetings in retail stores has been swept free of any Christian expression.  I’m not saying that speeches or manger scenes or greetings are themselves Christian; I’m simply noting that many of the people who engage in these things are Christians.  In a world where we are told that all viewpoints matter, the Christian viewpoint seems to be increasingly marginalized.

The truth of the matter is that the secular world only fights this battle when things are going well.  On the Support Joe Kennedy FaceBook page, Rosemary Norris Agee said it better than I ever could:

Mr. (Superintendent) Leavell, I am a resident of the sate of Oregon.  I live a few miles from UCC where we had the recent shooting of students.  Without prayer our community would not be able to heal.  As a concerned citizen and a follower of Jesus Christ, I pray that you will lead from the hip and allow the coach to continue to pray with the players on the field.”

Prayer becomes a crucial part of our society – not just for the religious – when tragedy strikes.  If you don’t believe me, ask the folks in Stillwater, Oklahoma.  Saturday was Homecoming, the high point of any football season.  A horrible accident at the Homecoming Parade that killed 4 people including a 2 year-old boy caused the PC no-prayer rule to be thrown out the window.  Photo after photo testify to the prayerfulness of the both the team and the crowds in Stillwater. 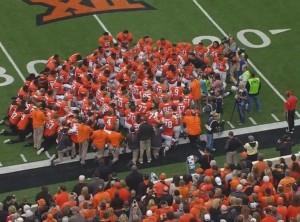 Last October I found myself in a small rural town in Louisiana.  I was there to preach at a dear friend’s ordination ceremony.  In the pregame warmups, one of the cheerleaders for the opposing team had a very serious accident that required her to be taken to a hospital by helicopter.  The scene was surreal.  Hundreds of people were in the stands, but you could have heard a pin drop.  Everyone knew the situation was grave.  Then the announcer came on over the PA system and respectfully asked people to pray with him for the injured cheerleader.  I was already praying.  I was glad for the company.  Not a soul objected.  They seldom do when life hangs in the balance.

Please understand my position.  I am not arguing for the return of pre-1950s in-school teacher-led prayer.  Surprising to most, I am against that idea for biblical reasons I would be glad to enumerate for you.  However, I do think all people – teachers and students – have a right to exercise their faith.  Including Coach Joe Kennedy.

To Coach Joe Kennedy, should he ever read this:

I found myself in the midst of a football/religion news circus in 2009. A dear friend of mine wound up leaving his coaching job over the incident.  He is a man of deep character and, like you, Christian conviction.  I would tell you what I told him:  Some things are worth being fired over.  Joe, I so admire your spirit.  You have not tried to inflame the situation needlessly.  You have sought out legal counsel in a situation that, sadly, will be decided in the court system.  Whether you win or lose the case (and I’m praying you win!!!!), I believe you have won where it matters most.  God always smiles when His children are faithful.  My prayers are with you!